Addiko Group is a banking group specialized in consumer and SME banking. It consists of six subsidiaries that provide services to over 828,000 clients throughout Central and Southeast Europe. In addition to an established network of 178 branches in five countries, Addiko Group also offers a variety of secure, reliable, and convenient online solutions to its clients.The Serbian subsidiary of Addiko Group – Addiko Bank Serbia – approached Zoom Engage in April 2019 with the goal of maximizing their website conversion rate, increasing on-site visitor engagement, and creating a set of digital solutions that would make client interaction with the bank effortless

Having confirmed that Zoom Engage meets all their requirements in terms of technology, security, and privacy, Addiko Bank’s marketing team presented Zoom Engage with the following set of challenges:

Promoting Addiko Bank’s online content while meeting the highest level of data protection, security, and privacy standards Ensuring
website visitors have a convenient and quick way to contact the Addiko Bank Serbia call center
Displaying separate loan promotions to different groups of clients
Developing an overarching online strategy that would allow Addiko Bank Serbia to quickly and efficiently adapt to the shifting needs of the market

The target audience for this project was in accordance with its scope – wide. This, however, turned out to be a case of foresight. With the help of Zoom Engage, Addiko successfully implemented a set of solutions that empowered both existing and prospective clients to conduct business with the bank without having to visit one of its many branches, which resulted in Addiko responding faster and more efficiently to the coronavirus crisis.

During the onboarding process, an Addiko Bank representative remained in close contact with Zoom Engage Dedicated Customer Success Manager to ensure all needs were met and all requirements clearly understood. Having familiarized themselves with the scope and aim of the project, the Zoom Engage team proposed several implementation options for each of the presented challenges. Once Addiko Bank’s management chose the most appropriate options, the Zoom Engage team created a streamlined strategy and began work with Addiko Bank’s Digital Manager on its implementation.

Addiko Bank wanted to launch a campaign that would offer special loan terms to all website visitors who were willing to leave their contact. The Zoom Engage team suggested creating a pop-up form that would appear on all pages related to loans. However, one of the details requirements was that the offer remain hidden while visitors were browsing the site. It was agreed that the most effective solution would be to create a “trigger” that would launch the campaign only when a visitor indicated their intention to leave a certain page by moving their mouse pointer toward the “close” button

This campaign was of the highest priority for Addiko. It was important that it went live as soon as possible. With Zoom Engage, Addiko had the campaign in place and ready to go within 3 hours. A year later, using ZE, the bank saw an increase of 16.2% in the number of leads collected.

The success of the lead collection campaign encouraged Addiko to launch another loan campaign that would empower visitors even more by letting them choose the exact conditions of their loan. This included choosing the desired amount and repayment period. The goal wasto provide whatis perhapsthe most relevant information to anyone considering a loan – a projection of their monthly installments 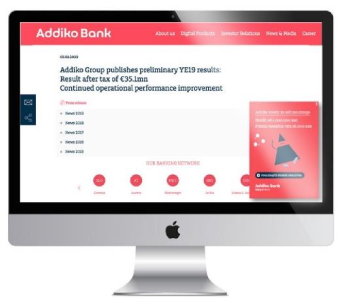 To boost conversion on loan pages and make calculators more visible, Addiko wanted to make another campaign using Zoom Engage tool. This was accomplished by creating an animated “bubble” that would appear to visitors once they scrolled down 20% of the page. Clicking on the bubble would lead them to the calculator but also engaged them better to the page itself. In terms of targeting, it was decided the bubble would only appear on pages that did not have the word “loan” in their URL, since the previously discussed pop-up campaign was already live on those pages. The campaign was activated with the same rules for both mobile and desktop devices, only adjusted to different screen sizes.

This resulted in a stunning conversion rate – using ZE, Addiko increased the number of people filling out the forms and activating the calculator widget by 28.2%.

Since the “bubble” campaign had positive results among mobile users, Addiko wanted to implement a solution that would make it even easier for mobile users interested in loans to contact the Addiko Bank Serbia call center.

The Zoom Engage team suggested a Click-to-Call campaign that would only appear during the call center’s working hours and only on pages related to loans.

The campaign would be triggered when a user remains inactive on a page for more than 10 seconds. Once clicked, the campaign would automatically dial the Addiko Bank Serbia call center. It took the Zoom Engage team 2 hours to create and implement this campaign. More than 4.84% of the people who saw the campaign dialed the call center

Addiko Bank Serbia’s digital management team cites the ability to receive direct and precise analytics and to track a campaign’s performance in real-time as one of the most important benefits of using the Zoom Engage platform, alongside the ability to launch on-site campaigns quickly. Zoom Engage allowed them to take a strategic, data-driven approach to decisions related to user engagement on their website and empowered them to act on those decisions instantly.

Within a single year, the campaigns implemented through Zoom Engage boosted the conversion rate of Addiko Bank Serbia’s website by 5%

The collaboration between Zoom Engage and Addiko Bank Serbia continues to this day. ZE has now been implemented as a must have tool in multiple Addiko Group subsidiaries.

Excellent tool, very easy to use and with so many options. It’s a very good choice if you are looking to get more visitors and increase conversions. Zoom Engage’s managers are always there to help and it is a pleasure working with this team

Zoom Engage is a brand by Zoom Analytics (ZA) that provides a platform that helps websites increase engagement with their visitors by identifying visitor segments and maximizing the conversion rate through smart on-site campaigns. No IT or Design team needed. Zoom Engage is GDPR compliant and has implemented information security management system ISO 27001:2013